Chaos is not as chaotic as it seems.  When you’re in it, yeah, it seems like it’s a mess!  It seems like the number of options and choices grows exponentially.  And, from a systems perspective, chaos does grow exponentially.

But, for those who are overly-perturbed by the uncertainty of chaos: take hope.

Every chaotic system has stable nodes.  As you add energy into a system — say a society, or culture — more and more modes of observable behavior become available to the system.  As you add energy, the system can bifurcate into one mode or another.  Turn up the heat some more, and each of the modes bifurcates further.  Very soon you have what seems like an near-uncoutnable number of modes from which to operate.  Each node is a “strange attractor” into which the members of the system (e.g. people) fall.

At some point, when there is enough energy in the system, the number of possible modes condenses or coallecess into significantly less available nodes.

That’s counterintuitive, but that’s how complex physical systems behave.  And I’m not the only one to have drawn parallels with group dynamics in humans.  Psychology professor Dr. Bud McClure of the University of Minnesota uses models of chaos to model group dynamics. As groups of people relate, they go through non-linear changes and self-organizing behaviors.

I think this model of chaos in group dynamics is a useful one in the time of COVID-19.  What’s important to understand is that there is sensitivity to initial conditions, which means the even the smallest, seemingly-insignificant choices can produce big non-linear changes.

The image below is an example of a bifurcation map that illustrates how a single line of available states, or behaviors, bifurcates into two nodes, then 4, then 8, etc.  Soon, there are so many nodes, they all seem to blend together!  Many of the states are very close to one another.   The number of available states, or outcomes increases, as “energy” or information is added to the system.  But, at some point, there are 3 nodes.

In terms of group dynamics, according to Dr. McClure, some of these “stable states” can be regressive.  That is, primal old ways of dealing with life that are the way we dealt with things hundreds or thousands of years ago.

So, I said, “Take hope!”  Things will stabilize.  But, to which stable point we are attracted to depends on you. 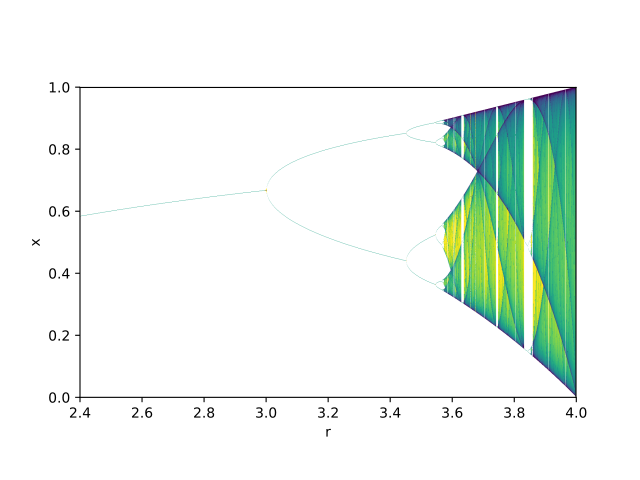 How-To Video + Quick-Use Guide: Download this FREE TRAINING to learn how to quickly mobilize energy in your body and awaken untapped Higher Brain potential. Release stress and elevate your mood!

You have Successfully Subscribed!

How-To Video + Quick-Use Guide: Download this FREE TRAINING to learn how to quickly mobilize energy in your body and awaken untapped Higher Brain potential. Release stress and elevate your mood!

You have Successfully Subscribed!